AEW has announced via their Facebook Page that at Fight For The
Fallen, 3 teams will get the chance again to advance to All Out for an opportunity at a first round bye in the AEW World Tag Team Championship tournament.

In a Triple-Threat Tag-Team Match, The Dark Order (Evil Uno and Stu Grayson) will battle Angélico & Jack Evans and the team of Jungle Boy & Luchasaurus for this chance. 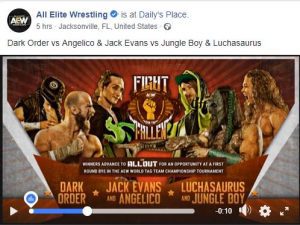 Earlier today, AEW also announced Britt Baker and the debuting Bea Priestley will be in action at the event.

Fight for the Fallen will take place on Saturday, July 13th at Daily’s Place in Jacksonville. The Card has 8 matches announced so far.

If you want to help out a new website, please share this or other articles on your social media. Thank you very much.

WWE's return to the Saudi Arabi. Crown Jewel 2022 from Mrsool Park in Riyadh with Roman Reigns and Logan Paul for the WWE Undisputed Universal Championship.

Shawn Michaels On The Future Of NXT Premium Live Events

AEW Dynamite on a Tuesday with a strong card featuring 4 Championship matches.
AEW

Watch or read the results from episode 85 of All Elite Wrestling Dark: Elevation. Athena, Penelope Ford and more in action.
Results

Have WWE and AEW interest in signing LAX?

Manage Cookie Consent
To provide the best experiences, we use technologies like cookies to store and/or access device information. Consenting to these technologies will allow us to process data such as browsing behavior or unique IDs on this site. Not consenting or withdrawing consent, may adversely affect certain features and functions.
Manage options Manage services Manage vendors Read more about these purposes
View preferences
{title} {title} {title}